No Widgets found in the Sidebar Alt!

Linda and Chris Moudry are honored to serve as the Grand Marshals for the 2022 Klamath Basin Potato Festival, an event they have supported for several decades.  For Chris and Linda, this harvest fair is a celebration of the beliefs they live by – love of family, vocation, and service to the community.

Chris and Linda’s story together began fifty years ago on a blind date.  They married in 1974 and a year later established Basin Fertilizer and Chemical together with Bob and Patsy Gasser and Jim and Joanna Shuck.   From the start, Basin Fertilizer was about serving growers and continuing to advance a vibrant farming community.  This included building the legacy of Gasser and Dunham, the business co-owned by Linda’s and Bob’s parents.  Due to the dedication of many employees and their families, Basin Fertilizer experienced phenomenal growth.  The company’s motto, “Service is Our Main Product” was a vision for the company that continues to this day as a new crop of owners and community leaders emerge.

Chris and Linda have both been directly involved in the Potato Festival since the mid-1970s.  Chris joined the Merrill Lions club in 1974 and since that time has held many jobs supporting the festival.  In 1979 Linda took on coordinating the food servers.  In 1981 Chris became the barbeque chair, the year they served about 2500 guests, and Chris continued as barbeque chair until 2008.  He enlisted the Basin Fertilizer crew to help wrap and pit roast the beef, which they do to this day.  Linda was the Potato Festival talent show coordinator in the early 1990s and through the years has served as a judge across categories including the parade, food, arts, and more.  Chris and Linda’s oldest daughter, Amie, was a Junior Princess in 1979.

Of course, Linda and her family have been involved in the Potato Festival and the community for much longer.  Her great grandfather, Frank Zumpfe, was one of the three original Czechoslovakian Colonialization Club scouts that settled in 1909 in what later became Malin.  With sandy soil, a favorable climate, and the Klamath Irrigation Project underway, Frank saw an opportunity and brought his wife, Marie, and family to the Klamath Basin to establish their homestead.

Among Linda’s favorite memories are of Potato Festivals of her youth.  Her parents, Bill and Evelyn Gasser, known for their warmth and hospitality, would open the large ‘Gasser House’ just across Lost River on South Merrill Road.  Linda recalls that throughout the day family, friends and neighbors would stop by for food, and drinks and to share the day (and maybe warm up if it was a cold one).   At this year’s Potato Festival, Chris and Linda will celebrate in Bill and Evelyn’s honor, remembering them as models of community leadership and family.

Anyone who knows Linda and Chris knows that they absolutely cherish and put family first.  They are beyond proud of their two daughters, Amie and Rebecca, their spouses, and their five grandsons. Chris and Linda have dedicated countless hours to supporting the kids in sports and school.  Chris coached both girls in YBL and middle-school basketball for a total of 8 years. Linda helped with grade school gymnastics and coached Becky’s racquetball team for several years.  Perhaps their biggest impact was serving as co-chairs of the Lost River Booster Club from 1989 through 1991.  The LRHS Boosters Club led the multi-year effort to raise funds and construct the all-weather track. They both continue to support local schools in many ways.  You may have found Linda running the elementary school popcorn cart, Chris reading books to a first-grade class, and they always step up to help out with fundraisers.  Over the last number of years, Chris and Linda wouldn’t miss a football, basketball, or baseball game that their grandkids, Chase, Aiden, or Cole, were playing.

The 2001 shutoff of Klamath Project irrigation water required an unprecedented show of engagement and action.  Chris and Linda, along with Bob and Patsy Gasser, transitioned Basin Fertilizer into an organizational center, rallying the community to identify solutions and take action.  This included the ‘Bucket Brigade’ to highlight the severe impacts the water shut-off had on families, livelihoods, and the future of the community.

Recently both Linda and Chris have taken on roles to give back to the larger Klamath Basin community.  In 2008 Linda joined the Klamath Falls chapter of Soroptimist International, an organization whose mission is to create opportunities that transform the lives of women and children.​ She served as President in 2012, chaired several committees, and in 2022 accepted a district coordinator position.  Chris has become increasingly active in the Klamath County Rotary Club and served as President from 2020-2021.  Rotary sponsors the Klamath County Rotary 4H/FFA Livestock Auction, and Chris has been the Chair of that for the past three years.

Linda is also a dedicated member of St. Augustine Catholic Church.  She was raised attending the same church as her parents and her grandparents– Linda is, in fact, a third-generation member.  As a teenager, she served as a Sacristan. Today Linda continues her support of the Women’s Club and Choir and often assists with the offertory.

In 2020 Chris and Linda retired from Basin Fertilizer and Chemical. They continue to stay very busy with their community activities and traveling to Washington, DC to visit their youngest grandkids, Lorenzo and Maxen.  Chris and Linda have traveled the world and are always excited to plan their next big international expedition.  More than trips, they treasure the opportunity to learn about diverse people, history, and perspectives.

The Potato Festival and Klamath Basin community roots run deep for Linda and Chris Moudry.  They hope to continue in service to the community and the people they love, supporting a foundation for the next generation to raise their families, build a business, and find opportunities in the Klamath Basin. 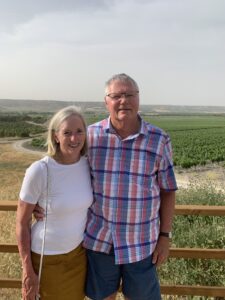