Anabelle Ross of Lost River Jr.\Sr. High School was born and raised in Merrill, Oregon. She is the daughter of Michael and Laurie Ross and has a younger sister, Audrey. Her parents are teachers at Merrill and Lost River, and her grandfather, Larry Ross, also taught at Lost River.  Those close ties have given Anabelle strong passion and love for her community. At school, she is in honors classes, Robotics Club, Leos Club, National Honor Society, the Malin Community Service Club, and has been student council president for three years. Anabelle participates in many community-based activities, as well as participating in volleyball, track, and softball, all while holding a job and a 4.0 GPA. Outside of school, Anabelle likes to make jewelry, kayak, and collect different kinds of plants. After graduating, Anabelle plans to attend the University of Washington and become a speech-language pathologist. Anabelle has struggled with a speech impediment and wants to inspire others to overcome the fear that she once shared. Anabelle was part of the 2009 Klamath Basin Potato Festival Queens Court as a Junior Princess when she was a kindergarten student at Merrill Elementary. She hopes to make her community proud by representing Lost River and both the Merrill and Malin communities in this year’s festival.

Yuleidy Gonzalez-Zuniga is Tulelake High School’s Potato Festival candidate. She is the daughter of Silvia Zuniga and the youngest of six. Yuleidy is a driven individual who loves to be involved and help when needed. She is active in her community and participates in several extracurricular activities. She has served as Vice-President for the Student Body, Rotary Interact, and FFA. She has served as a member of the Tulelake-Butte Valley Junior Fair board for four years. Yuleidy is the current FFA president, raises market-ready lambs, and competes in career development events such as Vegetable Crop Judging and Agronomy. Her team won the California State Championship in Agronomy and will be competing at Nationals in October. Yuleidy is an Honor Roll student and athlete who participates in volleyball, basketball, and softball.  She is determined and proud of everything she has accomplished and will continue to accomplish. Her hobbies include baking and gardening, which allow her to relax her mind. During the last two summers, she has worked for her school’s Ag Department. She enjoys this job experience because it has furthered her knowledge and has grown her passion for agriculture. A quote Yuleidy always lives by is, “Keep going, because you didn’t come this far to only come this far.”

Savannah Preston is Henley High School’s Potato Festival candidate. A third-generation resident of Klamath County, Savannah is the daughter of Chris and Patty Preston, and the proud sister of Lily, a sophomore who also attends Henley. Savannah has achieved the Principal’s Honor Roll every year for maintaining a 4.0 GPA with a schedule that includes Honors, AP, and dual-enrollment courses through Klamath Community College and the Oregon Institute of Technology. Beyond her academic life, Savannah has been involved with the Student Government at Henley since her freshman year and is currently the Student Body President for her school. She also plays an active role as a volunteer for Key Club and Henley’s Hunger: Not Impossible program that assists food-insecure teenagers. She is in Robotics Club, leads the Chess and Debate clubs, and is a member of the Executive Committee for Henley’s chapter of the National Honor Society. Outside of school, Savannah enjoys cheering for the Henley Hornets with the Swarm, volunteering, and going to the beach with her family. After graduation, Savannah plans to attend a university and study chemistry, with the goal of attending medical school to become an allergist.

Adriana Ramirez is the representative for Butte Valley High School. She was raised in Dorris, California, by her parents Hector Ramirez and Fabiola Salcedo. Adriana is the oldest of five siblings and does her best to be a role model for them. Her little brother is her best friend. Adriana enjoys dancing spending time with her friends. She is very involved in her community and is active in Upward Bound, FFA, CSF, and ASB. Adriana plays soccer, basketball, and participates in track. In addition to being a candidate for the Klamath Basin Potato Festival, Adriana is also Ms. Butte Valley for the Tulelake-Butte Valley Fair. This will be her second year showing rabbits at the fair. Adriana has worked in the strawberry fields in the summers since she was fourteen years old. After high school, she would like to attend Chico State or Fresno State University and pursue a career as a teacher or in the dental field. Adriana is excited to be a part of the 2021 Klamath Basin Potato Festival.

Bailyn Amos, Klamath Union High School’s candidate, was raised in Klamath Falls by her parents Mychal and Angie Amos. She has an older brother, Tayson, and two younger sisters, Elly and Payton. Bailyn is a very involved student at Klamath Union High School. She takes honors classes and receives dual college credit through OIT and SOU. She is working towards an associate degree in Media Design from KCC. Bailyn is the Business Team leader in the Klamath Unions Media Design Program and directed the winning film of the 2021 Southern Oregon 48/48 Film Festival. Bailyn plays varsity volleyball and tennis and coached a week-long tennis program. She is also an active member of the National Honor Society, and she loves being involved in ASB and other school activities. After High School, Bailyn plans to attend film school and pursue a career in cinematography. 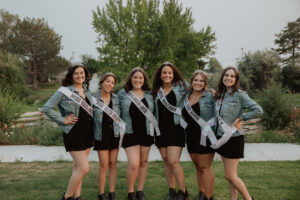