No Widgets found in the Sidebar Alt!

Tara Guthrie is a 4th generation rancher/farmer in the Basin, and the daughter of Tim and Dana O’Connor. She was raised on the O’Connor ranch with her two sisters outside of Merrill, Oregon. Growing up, Tara often stayed with her great-grandmother Mary Porterfield and helped her grandfather Roger on the historic JF Ranch. Tara continues to be active in farming with her husband Jesse and their four children, Connor (13), Peyton (10), Alexis (7), and Chipper (2). Tara is an assistant professor and program director for the Echocardiography Program at Oregon Tech. The college sits on land once owned by her great grandfather John D O’Connor.  Tara’s education includes a bachelor’s degree in Small Business Management (‘03 Oregon Tech), a bachelor’s degree in Vascular Technology (‘04 Oregon Tech), and a Master of Science in Biology (‘16 University of Nebraska Kearney). In her free time, she enjoys sewing, gardening, hunting, fishing, boating, and watching her children compete in sports.

Ashley Crawford is a second-year chaperone for the Queen’s Court. She grew up on the Oregon Coast, where her family operated a logging company. Ashley attended Oregon State University and earned a bachelor’s degree in Spanish. She is married to Bryce Crawford, 4th generation Klamath Basin farmer. Bryce and Ashley reside in Malin, the third generation to raise a family in the Stastny home. They have four sons, five-year-old triplets Bryson, Gavin, and Easton, and one-year-old Logan.  Ashley spends most of her days chasing her gaggle of boys and helping to care for her niece and nephew. She enjoys spending time with family and friends, volunteering, traveling, camping, boating, and baking.

Lela (Baley) Marshall is a 4th generation farmer’s daughter, born in the Klamath Basin.  Lela graduated from Lost River High School in 2010. In 2015 she graduated with a bachelor’s degree from Oregon State University and in 2018 she received a master’s degree from Colorado State University.  She currently works for Northwest Farm Credit Services supporting agriculture and rural communities with financial services. In 2017 she married Dane Marshall of Lakeview, Oregon. Together they have two children, Emerson (5) and Rory (3).  They live in Tulelake, California, on the family farm. Lela enjoys spending time with her family, photographing special memories and events for clients, visiting the Oregon Coast, and being involved in the community.

Amanda is a 4th generation resident of Tulelake, Ca, where numerous family members have been a part of the agriculture community. Amanda graduated from Tulelake High School in 2006. She attended the University of Nevada, Reno, and in 2011 graduated with her Bachelor of Science in Nursing. After spending 5 years in Medford as a NICU nurse, Amanda moved home, back to the community to love. She currently works as a Pediatric Nurse at Sanford Children’s Clinic. She recently graduated with her Doctorate of Nursing in Pediatric Primary Care and will be starting her new position, within Sanford, as a pediatric nurse practitioner this Fall. Amanda has a long family history with Potato Festival; she was a candidate in 2005, her grandmother, Barbara (Salyers) McAulliffe, was a candidate in 1951, her mother, Kathy (McAuliffe) Kirby, was crowned queen in 1975, and most recently her cousin, Hannah McAuliffe, received runner up in 2017. In her spare time, Amanda loves to bake, cheesecake is her specialty! She also enjoys watching San Francisco Giants games with her family. 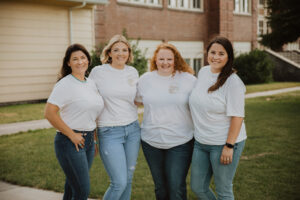